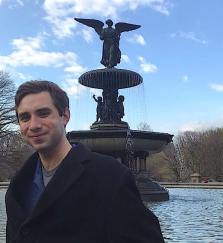 Peter Labuza is a Postdoctoral Fellow at the University of Southern California, where he also earned his PhD in Cinema and Media Studies. His research explores the legal, financial, and political history of creative industries. His dissertation, “When A Handshake Meant Something: Lawyers, Deal Making, and the Emergence of New Hollywood” traces how new legal professionals and deal makers reshaped creative labor and financial management in Hollywood after World War II. He is currently working on a project examining antitrust lawyers and legislators and their relationship to the New Left, and another on the transformation of cinema from mass communication to personal expression as a reflection of economic reorganization in the postwar.

Labuza has received numerous fellowships and grants supporting his research from an array of archives and disciplines, including in legal, business, and Jewish history. He has published in The Velvet Light Trap, Mediascape, Film Quarterly, Sight & Sound, and The Los Angeles Review of Books, and has forthcoming articles in the Journal for Cinema and Media Studies and Film History.

He has published film criticism in Variety, The Village Voice, and Filmmaker Magazine, and more.

He earned both his BA and MA in Film Studies from Columbia University.

Labuza recently wrote about some possible consequences of the Paramount Decrees for Vox Media.

You can communicate with Peter via email at plabuza@gmail.com. He also keeps an active social media presence on Twitter, Facebook, and Letterboxd.

Outside of his academic work, Labuza is the host of The Cinephiliacs, the author of Approaching The End: Imagining Apocalypse in American Film, and served as a booklet editor for the UK Blu-Ray distributor Masters of Cinema. He has contributed to Variety, The Village Voice, Reverse Shot, The AV Club, Little White Lies, Indiewire, The LA Review of Books, Filmmaker Magazine, and RogerEbert.Com among others.

This site serves as Peter’s general resume and CV to work he has done. All writing and research can be found via the page links on the left.

If you have arrived here via a broken link to a blog post, you will find the correct story on the blog posts page. If you cannot find it there, please contact him at plabuza@gmail.com.