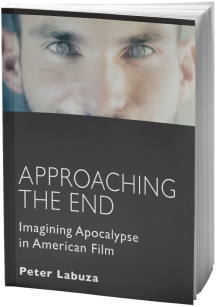 Tracing a timeline from World War II to the present day, Approaching the End rethinks apocalyptic cinema by considering its relationship to film noir, the fatalist crime genre of the 1940s and 1950s that remained pervasive through Hollywood’s changing tides. Challenging the common notion of apocalyptic films as special effects destroying cities through natural disasters and alien invasions, Labuza examines films that truly push humanity to the edge, considering why certain American works have imagined our ends. Starting with the explosive Kiss Me Deadly, the book examines various apocalyptic scenarios and how each one ties together through issues of displacement and amorality: from the atomic anxiety of The Big Heat and Lady from Shanghai, to the religious peril of Days of Heaven and The Rapture, to science fiction dystopias of The Terminator and They Live, and ending with the media implosion that is Richard Kelly’s Southland Tales. As diverse as these films may appear on surface, Labuza investigates the hidden structures underneath, which reveal how apocalyptic narratives explore the darker edges of humanity’s moral failings.

Reviews for Approaching the End

Labuza offers a fresh new perspective on a subject for which the critical consensus has prevailed for nearly seventy years. If nothing else, Approaching the End sheds a new light on films that run the gamut from cult perversities to auteurist chestnuts, making it a superb addition to the rapidly growing canon of new cinephilia texts.
—Joseph Yanick, Cineaste Magazine (Spring 2015 Issue)

Labuza gives a fair shake to every film, pointing out both their relations to noir and how the apocalypse occurs in each of them, even if in some it’s not quite apparent. He gives further analysis to social, religious, technological and structural points that each of these movies give, with a prose that’s easy to read and rarely academic. This brings forward my point about the necessity of us understanding ourselves in the midst of this life not only surrounded by media, but turned into media itself. Labuza’s is a book that takes a look at how we can see these movies as more than “genre” pieces, as all of them are, but as reflections of the time and what we are right now.
—Jaime Grijaba Gomez, Twitch Film

Idiosyncratic choices make for engaging film criticism, and Labuza’s arguments are generally persuasive. (He even convinced me to give Richard Kelly’s reviled Southland Tales another look, a decision I don’t entirely regret.)
—Scott Von Doviak, Vermicious