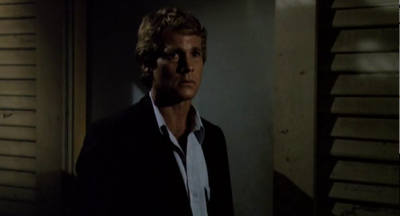 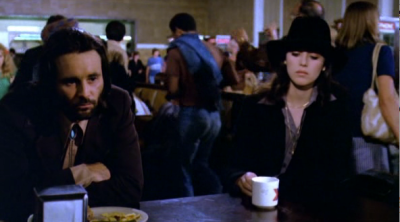 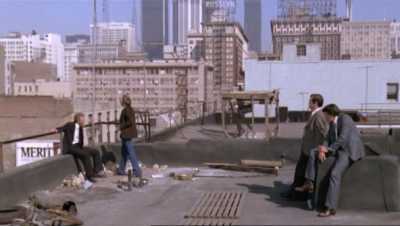 Michael Mann paints men into landscapes they cannot fathom. Space becomes disentangled while their bodies remain firmly solid—they cannot evolve as the future seems to be heading. The backgrounds become dots of light and splashes of colors—what actually defines their relationship to the world around them is slipping away.

Such is not the case with Walter Hill and The Driver. Just look at the parking garage with its multiple columns of concrete, one after another, all in focus. This physical domain is one with the men who walk and control this space. There is no worry about a future or a past; everything exists in the now.

In The Driver, everyone knows the score. Characters walk without names or backstories because there’s no need for anyone to inform who anyone is. There are causes and effects. Everyone follows the same set of rules. There are only bold colors and gestures—strong diagonals, right angle movements—nothing comes as a “surprise.” Motivations are boiled down to single words: “rush,” “money,” “asshole.” Stoicism is less of a choice than a necessity. The material details are somewhat pointless; it’s only about the mechanics of the game (the sports page monologue is no throwaway).

Hill’s compositions are never “abstract” in the way Mann’s are. Everything is always inside the frame. He works from perspective that makes his frames feel like a painter from the Renaissance in how straight-forward everything can be. One could call it part of his workman-like craft, but there’s also a solid emptiness to his frames that feels indebted to American Realism, most notably Edward Hopper. Hill’s major stylistic motif in The Driver is space, whether in their proximity but more often their distance. They never move too close to each other. The potentials for physical contact—romantic, lustful, violent—remain minimum. They only occur when no other option is possible.

Hopper’s paintings are often described for their loneliness, cited for how they exude the way people seem so alone in the big city. But his faces are too unknown to us to suggest loneliness. To me, they suggest silence and a pleasure for it. His characters are internal; not necessarily unknown as much as searching for a tranquility the city often deprives them of. Hill’s The Driver works the same way—his people aren’t necessarily against connection, but they prefer things to work in terms of minimum interaction and complication. There’s a contempt for excess.

This excess must go somewhere thus, and here it is the machines that carry these people through the city. The engines roar and the tires screech loudly as they turn. They make a mess of the sidewalks around them and pour light and sparks into the night. They collide with each other because that’s what they’re supposed to do.

The Driver ends with a closure of narrative, but not a closure of character. In fact, the one thing the characters never do is change. They remain convinced of their ideals and motivations as much as they were at the start of the narrative.

Leon Alberti told painters to always depict the moment right before whatever big thing was about to happen would happen (ie. you show Medea deciding to murder her two sons, not the moment of her murdering them). Such a detail would create historia, a presence of an entire narrative and thus movement in a medium not sustained for time. But time could be created nonetheless. But there’s no narrative in Hopper. It’s a frozen moment in which the characters can take in everything because they are silenced by what happens around them

The Driver is a motion picture, and thus it necessarily must suggest the movement of time and space before and after the credits role. But there isn’t is a suggestion that this cycle is doomed to repeat itself. That is, certainly if the narrative continued, we would see the cycle play itself, but Hill is much more interested in the closed circuit. We’ve entered the world, seen what’s necessary, and now it’s time to go. They take in the stoic ideal. The possibility that in a city full of sounds, they can revel in the moment where tranquillity occurs.