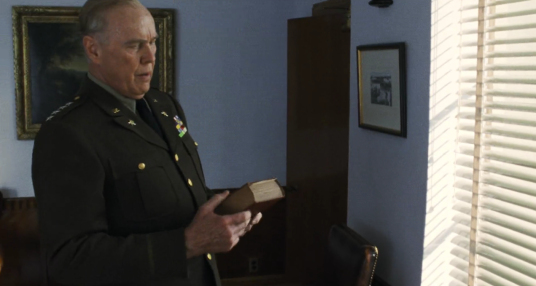 “A compass points to true north, but it gives no indication of the swamps and marshes along the way.  If you just use the compass you will get stuck, and what use is knowing true north if you are drowned in a swamp?”
—Lincoln

I had the immense pleasure of revisiting Steven Spielberg’s Saving Private Ryanfor the first time in at what must be at least over half a decade if not longer. It appears, since its release, the film has been attacked more and more for essentially being a piece of propaganda—well made and beautifully shot propaganda, but propaganda nonetheless. I’m told that Saving Private Ryan valorizes the soldiers of World War II while slyly attacking the generation of both soldiers and films of the Vietnam Era.

Certainly Saving Private Ryan asks us the memorialize all those who fought in the Greatest Generation, but what the film doesn’t do is ask us to see their heroics in the same way American culture often does. Saving Private Ryan is essentially a response to the Norman Rockwell way of life, often using his iconography to question what the good society is. In the end, Spielberg proposes a radical social democracy that mirrors Frank Capra’s It’s a Wonderful Life, where democracy and our relationship to it is not built on the principles of the state, but a series of small intimate relationships built around living the good life.

Let me stray for a second and talk about Lincoln, Spielberg’s other film about the relationship between the state and its subjects. Lincoln is essentially a working through of the radical notion of Hegelian positivism and the dangers that come with it. The truly erudite critic Theo Panayides found fault in Lincoln for being too much on the “right: side of history, which drains some of the narrative tension, but I think that’s where a new tension develops out of: how far are you willing to compromise everything other moral bone in your body for what you know to be true and right? Throughout the film, Lincoln makes every side deal, rhetoric trick, and sly move he can to fight for the righteous side of history. His character knows that in the end, the bill will matter, and what led to it will not—the classic “ends justify the means.” Some might want to question if this is what Spielberg believes, given how bombastic the film can be at points. However, part of this is how closely he plays his cards to his chest in revealing this side, allowing him to work both sides: accept the surface and you see “history being made,” dig a bit deeper, and you’ll see the cynicism at work.

Saving Private Ryan operates in a similar moral vacuum, where the state accepts grand gestures at any cost. The mission? The United States army relieves a soldier of duty so be with his family, an act of great kindness. The real mission? A sacrifice of eight men for the life of one publicity stunt, whose lives have no value beyond the propaganda they can create. But orders are orders, and must be followed. Why do the higher ups send Captain Miller (Tom hanks) and crew on a suicide mission? Certainly the case of the Sullivan brothers, named checked in the film, rests heavy on the American soul. But the most essential statement comes from Abraham Lincoln himself, now in the form of a letter read by Army Chief of Staff General George C. Marshall (Harve Presnell). Marshall, attempting to convince the various army personnel to allow the mission, reads aloud the following letter, sent to a Mrs. Lydia Bixby of Massachusetts:

“I have been shown in the files of the War Department a statement of the Adjutant-General of Massachusetts that you are the mother of five sons who have died gloriously on the field of battle. I feel how weak and fruitless must be any word of mine which should attempt to beguile you from the grief of a loss so overwhelming. But I cannot refrain from tendering you the consolation that may be found in the thanks of the Republic they died to save. I pray that our Heavenly Father may assuage the anguish of your bereavement, and leave you only the cherished memory of the loved and lost, and the solemn pride that must be yours to have laid so costly a sacrifice upon the altar of freedom.”

Considered one of the greatest works of rhetoric ever produced, the Bixby letter also has a troubled history. The scholar Catherine Gunther Kodat, in what is an otherwise atrociously silly and overly critical reading of the film entitled “Saving Private Property: Steven Spielberg’s American Dreamworks,” takes us through some of the odd case relating to the letter.

The Bixby letter made its first public appearance in the pages of the Boston Evening on 25 November 1864. The letter had an editorial preface in which it was claimed that the indigent Widow Bixby had six sons enlisted in the Union army; five of them were killed in battle, and the sixth was being treated at the Readville Army Hospital. F. Lauriston. Bullard notes in his study the letter was immediately recognized as a triumph of rhetorical elegance and rapidly reprinted in the Boston Traveler, the Boston Journal, Horace Greeley’s New York Tribune, and the United States Army and Navy Journal—despite the fact that just three days after the letter was first printed, a notice appeared in the Boston Advertise announcing that one of the sons was not dead, but captured…In the months and years following the appearance of the letter, a series of investigations (most by curious journalists) established that of Mrs. Bixby’s five (not six) sons, two were killed in action, one was honorably discharged, one deserted, and one was a prisoner of war whom may have deserted to the enemy. Mrs. Bixby herself came in for close scrutiny: she was a Virginia native and an “ardent Southern sympathizer” with “little good to say of President Lincoln.”…[Finally], The long-held suspicion has been that the letter was not written by Lincoln at all, but by his personal secretary John Hay.

The first reaction I’m sure many would have is how dare Spielberg not check his historical facts on something like this? Or, one might instead ask, if Spielberg knows the very tumultuous history of the letter, why did he feel the need to include it?

The facts are facts, but the one thing that can never destroy the Bixby letter is the sentiment and rhetoric behind it. This letter is read aloud not by Hanks and his crew, but by a general far away from the carnage. For him, the details don’t matter, but instead he is interested in preserving the American mythology of our nation. My suspicions that Spielberg may have used the letter ironically came together in a scene preceding it when we see a series of women typing the KIA telegrams to mothers and fathers while overlaying the voiceovers of sergeants who speak nothing like the soldiers we later meet, their voices a fabrication of the delicate touch the women’s fingers bring to the typerwriter. Like Lincoln, Spielberg presents a world where the state is willing to preserve a mythological democracy is preserved at any cost.

So eight soldiers are sent on a mission that they have no choice but to follow, and thus must create their own purpose out of why they’ll do the mission. What Spielberg does through the film is not look at this as a story of eight men who were willing to sacrifice for some greater good, whether returning a mother to her son or the defeat of evil in Europe, but those who are caught in an existential crisis. Te recurring gag of the soldiers muttering “fubar” ends as a joke when it’s revealed to be “fucked beyond all recognition,” but that also speaks to how these soldiers literally see: their recognition of democratic values are literally lost to the point they cannot recognize them. The operations of American mythology—still present in almost each one of Janusz Kaminski’s careful lighted frames of silhouettes along a background—are always at play, but just as in Lincoln, it’s the cynical questioning of what those frames really represent that is being fought for through this film. The “mystery” of Miller’s identity turns out to be nothing but a school teacher. The last memory Ryan has of his brothers includes sneaking up on his brother during coitus and burning down his family farm. Spielberg exposes the human fractures that the American mythos of democracy attempts to build through grand gestures.

So if our great American myths are lost, what can we build out of it? As Hanks lies dying, he grabs Ryan and tells him, “Earn this.” Earn our deaths because the mission itself was bullshit. Do something great so our lives are not lost in vein. The film cuts back to its framing narrative, of a much older Ryan staring at the grave. He asks his wife, “Did I live a good life?” He cannot say—none of us can because besides knowing he has become a family man, we know nothing of his life after the war. But he has to know because it’s the only way he can justify the pain he brought so many for a mission that never mattered, a publicity stunt created under the sham of democracy. But he knows that the good life is something he doesn’t fight for because of some philosophy or social value, but something that he owes to the men who died for him.

In a way, Saving Private Ryan’s brilliant coda recalls the end of A.I.: Artificial Intelligence, not only because I’m covered in tears as it happens, but because it exposes how various institutions that are built on grand gestures often fail at the human level, leaving the spectator to find their own meaningful point to human existence. While A.I. raises this question to “what did the human race really mean?,”Saving Private Ryan localizes this to the state of American democracy in the post-Vietnam era, just as boldly and perhaps even more strikingly than any of the Vietnam films. But Spielberg also proposes a solution: a new radical democracy where our relationships are not to between ourselves and the state, but ourselves and those around us, that cause change in our lives. The film’s emphasis on communication: hearing and seeing oneself in another, becomes paramount in the director’s attempt to rebuild the world based on relationships between men. Spielberg certainly glorifies the Greatest Generation, but not re-producing the same old mythos, and instead using cinema to create a new mythos in which they are memorialized as men who fought for each other more than anything else, asking us to rebuild are notions of the good life not on grand gestures, so often covered with questionable lies underneath, but on the personal and the intimate.